The cotillion (also cotillon or "French country dance") is a social dance, popular in the late 18th-century and early 19th-century in Europe and America. Originally for four couples in square formation, it was a courtly version of an English country dance, the forerunner of the quadrille and, in the United States, the square dance. It was for some fifty years regarded as an ideal finale to a ball but was eclipsed in the early 19th century by the quadrille. It became so elaborate that it was sometimes presented as a concert dance performed by trained and rehearsed dancers. The later "German" cotillion included more couples as well as plays and games. During the 19th-century, cotillion patterns became more varied, and the dancing was combined with the giving of presents. The word finally came to denote ballroom dancing for couples that had little relation to the original form. 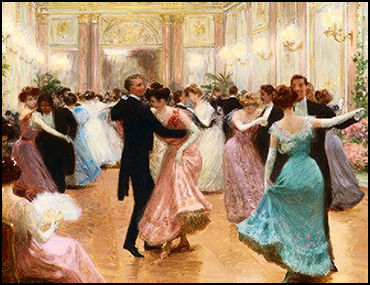 History of the Changes

The name cotillion (French: "petticoat") appears to have been in use as a dance-name at the beginning of the 18th-century but, though it was only ever identified as a sort of country dance, it is impossible to say of what it consisted at that early date.

As we first encounter it, it consists of a main "figure" that varied from dance to dance and was interspersed with "changes" – a number of different figures that broke out of the square formation, often decided spontaneously by the leading couple or by a caller or "conductor". Each of these was designed to fit a tune of eight or occasionally sixteen measures of 2/4 time. Participants exchanged partners within the formation network of the dance. "Changes" included the "Great Ring", a simple circle dance with which the dance often began, as well as smaller Ladies' and Gentlemen's rings, top and bottom and sides rings, and chains. Other changes included the allemande, promenade and moulinet. A complete dance composed of a prescribed order of these was called a "set".

The cotillion was introduced into England by 1766 and to America in about 1772. In England from that time onwards there are a large number of references stressing its universal popularity in the best and highest circles of society, and many teaching manuals were published to help recall the vast number of changes that were invented.

The quadrille gained fame a few years later as a variety of cotillion that could be danced by only two couples. While the cotillion kept all the dancers in almost perpetual motion, the quadrille often allowed rest to half of the participants while the other half danced. In the 1790s the cotillion was falling from favour, but it re-emerged in a new style in the early years of the next century, with fewer and fewer changes, making it barely distinguishable from the newly-emerging quadrille, which was introduced into English high society by Lady Jersey in 1816 and by 1820 had eclipsed the cotillion, though it was recognisably a very similar dance.

In the United States, quadrilles were termed cotillions until the 1840s, when it was realised that all the distinctive figures of the earlier dance had been taken up into the newer. The German cotillion was introduced to New York society at a costume ball with a Louis XV theme given by Mr. William Colford Schermerhorn in the early winter of 1854. Here, too, waltzes, mazurkas, fun, games and boisterous behaviour at private parties took on a more important role, and only some figures of the earlier dances survived. Finally the term cotillion was used to refer to the ball itself and the cotillion and quadrille became the square dance.

This year, we are proud to announce that we are incorporating a formal Cotillion into our Victorian Days celebration. It will be held the evening of Friday, September 7, 2018 at the Red Frame Mill in historic Belvidere, New Jersey. We hope you will join us. It is sure to be a convivial social affair.

At this year's Victorian Days, you will have the opportunity to participate in an evening Cotillion Dance, which will be held at the Red Frame Mill. Guests will enjoy non-alcoholic beverages of lemonade and iced tea, as well as cheese and fruit platters. Tickets may be purchased in advance for $20 per person. There will also be tickets available that evening at the door for $25 per person. In keeping with the tradition of Victorian Days, formal 19th-Century attire is highly recommended.

Belvidere Heritage, the new 501(C)(3) non-profit charitable organization responsible for planning Victorian Days this year, has entered into an agreement with The Lost Ramblers. The Band will provide entertainment for the organization’s first ever formal Cotillion, to be held 8:00 pm to 11:00 pm, September 7, 2018 at the Red Frame Mill.

A ticket is required in order to enter the Cotillion Dance.

Although online ticket sales for this event has ended, there are still tickets available. Tickets for the Cotillion will be available at the door for $25 per person.