​Seeking artists of all ages and experience levels who will embrace the 1890-1895 French Victorian style of painting en plein air!  Belvidere, NJ, is the perfect place to execute your art outdoors: Here you will easily find luminous plein air effects of natural light and atmosphere. 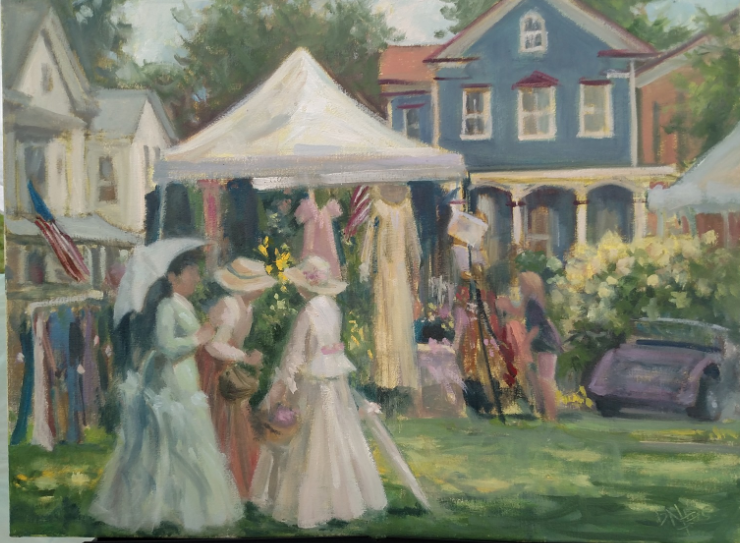 This event is open to any artist who paints using en plein air techniques, courtesy, and mediums.  This includes oils, acrylics, gouaches, watercolors, pastels, or pencils.  Other mediums require prior approval.  Artists supply their own surfaces, mediums, tools, sunscreen, lodging, and transportation.

En plein air is a French expression that means “in the open air.” It is used by artists to describe the art of outdoor painting, capturing landscapes and views in natural light.. This kind of art has been a popular practice for centuries and employs specific skills and techniques.

Artists have long painted outdoors, but in the mid-19th century, working in natural light became particularly important to the Barbizon school, Hudson River School, and Impressionists.

The first documented outdoor painters are Italian artist Agostino Tassi (1578-1644), who taught artist Claude Lorrain (1600-1682), who is known to many as the father of outdoor painting. His paintings are directly from nature’s survival. Italian artist Salvato Rosa (1615-1673) and French artist Nicolas Poussin (1594-1665) also painted with Lorrain.

It was in the next century that the landscape itself became an accepted subject for artists, led by Pierre-Henri de Valenciennes (1750-1819) in France and John Constable (1776-1837) in England. Both artists were passionate about encouraging their students to go outside to draw and paint.

In 1830, the Barbizon School in France, inspired by John Constable, enabled artists like Charles-François Daubigny and Théodore Rousseau to more accurately depict the appearance of outdoor settings in various light and weather conditions. In the late 1800s, the en Plein Air approach was incorporated with the impressionists’ style, and artists such as Claude Monet, Pierre-Auguste Renoir, Frédéric Bazille, and Edgar Degas began creating their work outdoors. From France, the movement expanded to America, starting in California then moving to other American locales notable for their natural light qualities, including the Hudson River Valley in New York. 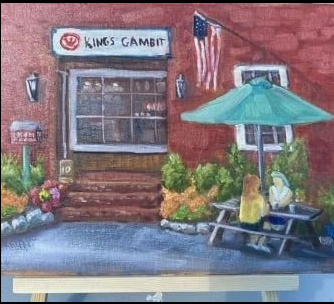 The Macchiaioli were a group of Italian painters active in Tuscany in the second half of the nineteenth century, who, breaking with the antiquated conventions taught by the Italian academies of art, did much of their painting outdoors in order to capture natural light, shade, and color. This practice relates the Macchiaioli to the French Impressionists who came to prominence a few years later, although the Macchiaioli pursued somewhat different purposes.

Their movement began in Florence in the late 1850s.
The Newlyn School in England is considered another major proponent of the technique in the latter 19th century. The popularity of painting en plein air increased in the 1840s with the introduction of paints in tubes (like those for toothpaste). Previously, painters made their own paints by grinding and mixing dry pigment powders with linseed oil.  The act of outdoor painting from observation has been continually popular well into the 21st century.

Click the buttons below for the Plein Air registration form.